Posted on November 15, 2014 by rhondakalkwarf

November is National Novel Writing Month, or NaNoWriMo as it is affectionately known by those who participate. 300,000 people around the world are busy trying to write a 50,000 word novel in the 30 days of November. I am one of them. This is my first foray into fiction.

Almost ten years ago, I heard the story of a man who was lost at sea while sailing alone in the Bahamas. His boat was found, in tact, but he was missing, presumed dead. No one knows for sure what happened. The seas in the area are known to be among the roughest for sailing. There are pirates around. Drug dealing was done from some of the islands near where his ship was found. The sharks were spawning. He had seriously injured his arm which may have affected his ability to handle his ship. There was reportedly someone who had relentlessly pursued the vintage craft the man had lovingly restored. His life was not going well at the time and he could have staged his own disappearance. No one knows. 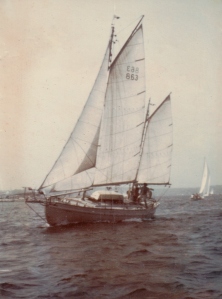 Last summer, I came in contact with some journals written by the wife he divorced shortly before embarking on his journey. There were also copies of important papers regarding the ship, the police report, letters between attorneys, paperwork about the salvage of the ship and a preliminary report of death from the State Department.

As I read through the paperwork, I thought, here’s a story. I knew I would have to write it as fiction because there is so much I don’t know. I would have to invent a lot of the story. In early October, that’s what I decided to do. I committed to write a novel loosely based on this story during NaNoWriMo.

In Mid-October, I mentioned this to someone I was visiting. She thought she might have some information that would help me. We went through boxes in her attic and came upon letters sent by this man to his father during the journey. There were seven of them and they provided a wealth of information about his route, his schedule, and, most importantly, about his feelings. They are fascinating and will be invaluable to me in my writing. She also had a copy of the report from the private investigator who was hired by the man’s father upon the disappearance.

I shared my excitement about this development with someone who was visiting the man’s son. It turns out the son had the original ship’s log from the journey. He sent it to me! After all these years, and significant time in the salt air, much of the glue has dissolved and the log has fallen apart and there is mold on the pages. Some of the ink and pencil has deteriorated, but most of it is still readable.

It turns out the man used the ship’s log as a combination log of the journey and a journal, so the log contains a lot of interesting information. I don’t speak “sailor” so I will need some help translating a lot of the sailing passages. The journal-like entries add humanity to the content.

This story started out as an interesting mystery to me. As I’ve collected more information, it continues to get more intriguing. The book will still be a novel because there is so much I don’t know. But, the information I have collected has never all been in one place or seen by one person before. I wonder if there would have been something to learn if it had been, shortly after his disappearance.

I never knew this man, but I know he was dear to others. As I read the materials, I’m getting to know more about him. He was a hard worker. He had a sense of humor and, obviously, a sense of adventure. He seemed to sail with an appropriate measure of caution (of course, I’m not a sailor!) He was also a faithful son, a good friend and he loved his children. He was on his way home to them when he was lost.