Posted on November 16, 2015 by rhondakalkwarf

I remember Grammy. Grammy was my great-grandmother. In our family, she’s the one who took care of us.  She cooked, she cleaned, she made our lunch and she was there every day when we came home from school.

Grammy was born in 1900, which I thought was pretty neat. She had curly gray hair from the time I remember her. Of course, that might have been from the pincurls she always seemed to have in her hair. Unless she was going out, her normal attire was a housecoat with maybe a cardigan sweater in the winter.. She had several and they had to have pockets so she could pick up out-of-place items as she went. There were always a couple safety pins pinned to the front placket. In a day before pantyhose, she wore her stockings rolled down to her ankles most of the time to protect them from runs. 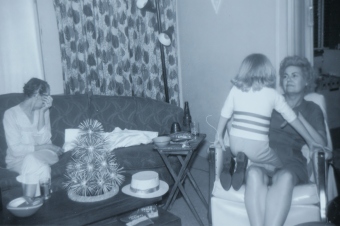 She hated to have her picture taken, as you can clearly see in this picture. It is the only picture I could find of the Grammy I remember. She’s the one on the left! In this era of digital pictures, this one would have been deleted.

Grammy catered to my aunt and me. She was the one who hugged us when we fell and nursed us when we were sick. My mother and grandmother used to get upset when she would make a couple different meals because one of us didn’t like what was on the main menu. She used her social security checks to buy special gifts for us.

I hear that when she was young, Grammy was quite a rebel! She was a flapper, she smoked and drank and she didn’t marry until the ripe old age of 22. The Grammy I knew was, well, grandmotherly. I always did have a hard time reconciling those different images.

When Grammy got sick, she didn’t tell anyone for a long time. She didn’t want to bother anyone, she was needed at home and there wasn’t much money. By the time she did get medical attention, her cancer was well advanced. She died within six months.

Grammy was one of eight children. When she died, relatives came from far away. Everyone loved “Aunt Alice”.

The spirit lives as long as someone who lives, remembers you. – Navaho saying

If you enjoyed this post, please consider subscribing to my blog using the link on the right side of the page.